How to Update Certificates for AD FS 3.0

Active Directory Federation Services (AD FS) 3.0 is a server role included in Windows Server 2012 R2. There are several documents and guides for replacing SSL, token-signing, and token-encryption certificates available for AD FS 2.0, but I couldn't find one for AD FS 3.0 so here it is. :)

There are three certificates used by ADFS for SSO:

Normally the Service Communications certificate comes from a trusted third-party CA, like DigiCert or GoDaddy. This is a traditional SSL cert like you would use in IIS for any secure web server. You may use a single-name, subject alternative name (SAN), or wildcard cert for this purpose as long as it's valid and trusted by internal and external AD FS clients.

If you have more than one AD FS server in your environment you will run the second half of these procedures from the primary AD FS server. The changes will replicate to all other AD FS servers in the farm.

If your organization uses Web Application Proxy (WAP) servers for your AD FS deployment, you'll want to update them with the same SSL certificate.

The Token-Signing and Token-Decrypting certificates are normally self-signed certificates good for one year, dated from the time the primary AD FS server was installed. The Office 365 portal will warn you when these certs are about to expire and that user access to all Office 365 services will fail. 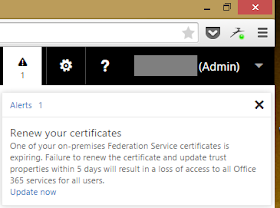 NOTE: Be aware that there is an AD FS service outage incurred when the Token-Decrypting or Token-Signing certificates are updated because the relaying parties must update their configuration to expect the new certs. Do this work when users are least impacted by the outage.

Before you renew the Token-Signing and Token-Decrypting certificates I recommend that you increase the AD FS certificate lifetime for self-signed certs.

A Note About WAP Servers

If your organization uses Windows Application Proxy (WAP) servers for your AD FS deployment, there's nothing else you need to do regarding Token-Signing and Token-Decrypting certificates. WAP servers only use the Service Communications SSL cert.

Thank you for your comment! It is my hope that you find the information here useful. Let others know if this post helped you out, or if you have a comment or further information.